Why Use Broad-Spectrum Infused CBD Gummies?

CBD has exploded onto the scene from very humble beginnings only a few years ago to being on the shelves of almost every store and being talked about by everyone. In fact, many people who were historically opposed to the use of cannabis products have taken to trying CBD for their ailments. This may be due to the fact that so many have reported relief from their symptoms associated with an amazing variety of conditions. These include relatively minor ones such as anxiety, depression, and chronic pain as well as life-threatening ones such as Parkinson’s, Alzheimer’s, epilepsy, and cancer. CBD’s reported therapeutic aspects have attracted the following of millions of people with more and more trying it every day. While there needs to be much more research done preliminary results are exciting, especially when coupled with users’ anecdotal experiences. As a result, the use of CBD amongst the population is on the rise and one of the most popular things on the market these days. One of the fastest-growing segments is CBD gummies with their ease of use and delicious flavors. They are an awesome way for newcomers to try out CBD and see if it is a welcome addition to their lifestyle. Read on to find out more about broad-spectrum infused CBD gummies and how they might help you in your life.

Contents show
1 What Does Broad-Spectrum Mean?
2 Why Do I Want The Other Compounds?
3 Why Should I Use Broad-Spectrum CBD Gummies?
4 How Can A CBD Gummy Help Me?

What Does Broad-Spectrum Mean?

Broad-spectrum refers to the number of cannabinoids, terpenes, essential oils, flavonoids, and amino acids found in the original hemp plant. A broad-spectrum CBD infused product has everything present in the parent plant with the exception of THC. The THC is removed and only trace amounts are present in a broad-spectrum extract. This is in contrast to full-spectrum, which has everything, including the 0.3% THC and THC free which sometimes will include only the component CBD. A broad-spectrum extract or gummy is an awesome way to get all the beneficial compounds found within the hemp plant without the fear of putting too much THC into your system.

Why Do I Want The Other Compounds?

Many CBD users have reported that the effects of CBD are stronger when used in conjunction with the other compounds found within the hemp plant. This includes other cannabinoids, terpenes, flavonoids, amino acids, and essential oils in a phenomenon known as the “entourage effect.” In fact, other compounds found in hemp such as CBG, CBN, and CBC have also been reported to have beneficial medicinal aspects. Cannabinoids themselves have been shown to work with the endocannabinoid system that is found in most living things on earth. The ECS is responsible for supporting a variety of bodily functions such as the immune system, respiratory system, and digestive system to name a few. It has been thought to play a large role in the body’s homeostasis and help to fight diseases and keep a balance. Normally it does this with naturally occurring endocannabinoids but it has been observed that cannabinoids from the cannabis plant act as a great replacement. This is why the “entourage effect” is thought to be such a powerful force. It floods your body with beneficial cannabinoids that react with the ECS receptors, allowing it to be as strong as possible. Meaning your body is quick to react when tackling the symptoms associated with so many ailments. 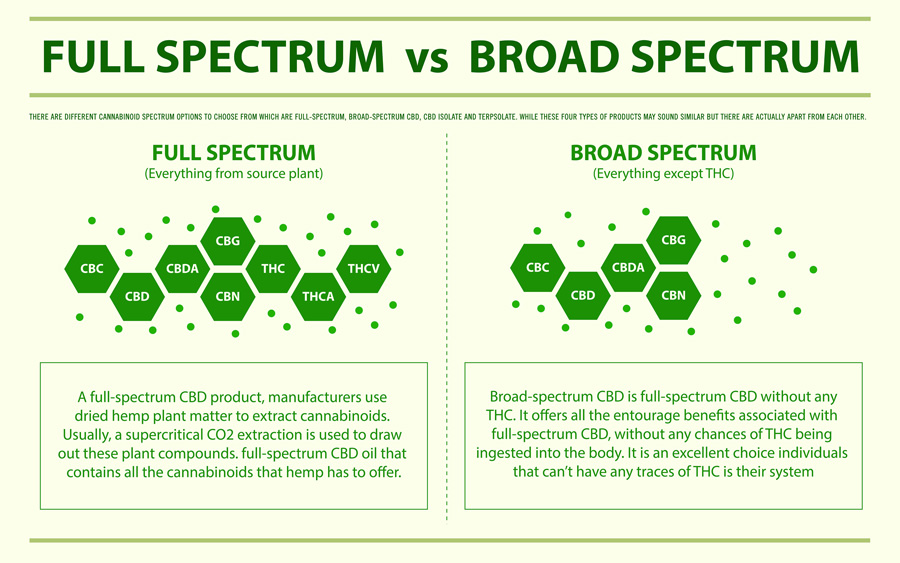 Why Should I Use Broad-Spectrum CBD Gummies?

Ask any kid, gummies are the fun and delicious way to take your vitamins. Taking a broad-spectrum CBD infused gummy is very similar to taking a multivitamin every day. They make it easy to take the right dosage, at the right times, and easily. Did we mention they are delicious too! With the exception of a slightly earthy but bitter taste from the hemp extract, however many say the earthy taste is what keeps them coming back. Broad-spectrum gummies are also an extremely potent way to get the cannabinoids and other compounds you are seeking from the hemp plant. They make adding CBD to your lifestyle easy by being easy to use and extremely portable. Take them on your next hiking trip or pack them for lunch. CBD gummies are perfect for any time you feel like you need a boost of your favorite cannabinoid.

How Can A CBD Gummy Help Me?

Broad-spectrum CBD infused gummies are perfect for anyone. Whether you are a newcomer or a veteran to the world of CBD they are an excellent way to get the dosage and convenience you are looking for. CBD gummies help with a variety of conditions such as anxiety, depression, and sleep issues. They are particularly useful for chronic pain and muscle recovery due to fitness activities. This is one of the main reasons the use of CBD has exploded among athletes and weekend warrior types alike. Whether you are seeking CBD as a general health item similar to a multivitamin or looking for it to treat a serious ailment, broad-spectrum CBD infused gummies can be a powerful ally.

Are you looking for the best broad-spectrum infused CBD gummies on the market? Look no further. We here at Revive are proud to offer some of the best broad-spectrum CBD infused gummies available. We use the finest hemp grown in American soil that is vegan, gluten-free, and organic. If you are ready to experience the Revive 2.0 differently please contact us at  Heath@Revive20.com or call us at 940-217-5521. We would love to hear from you and help you find the perfect CBD product for your needs. Look forward to hearing from you!

In recent months you have probably noticed that CBD has found its way into pretty much every product. For almost every food, beverage, or beauty

CBD is everywhere these days. It has become a global phenomenon in just a few short years and can now be found in almost every

CBD is the hottest thing to hit the beauty and skincare market in the past decade. It all started as a small niche product found

What Is CBD & It’s Benefits?

CBD is one of the biggest trends in health and fitness right now. Millions are talking about it from the media to your friends! It

Free Shipping on all orders